A Dish of Apples


I photograph because I can't illustrate.  Given the choice I would almost always favour illustration, and food illustration doesn't come much better than the work of Patricia Curtan.  An artist, printer and designer, my first introduction to her work was more than 20 years ago when I was handed a menu at Alice Waters' iconic Chez Panisse restaurant in Berkeley, California.  Chez Panisse opened its doors in the summer of 1971 based on a conviction that food grown organically, locally and sustainably was worth striving for.  Paying a fair price to the growers for top quality, super-fresh produce and cooking it simply and sympathetically was central to their philosophy.  Such uncompromising ethics come at a price but it's one plenty of people are prepared to pay, me included.  The current trend for 'local, sustainable and fair' owes a huge debt to Alice Waters and all associated with Chez Panisse. 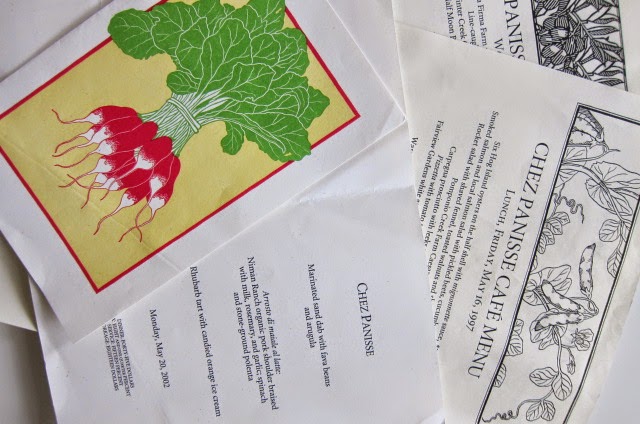 Patricia Curtan began her association with Chez Panisse working in the kitchen and producing letterpress and linoleum-block printed menus for the restaurant.  Cooking led on to consulting, menu and book design.  The connection with Alice Waters has continued for four decades, with Curtan's illustrations enhancing books such as Chez Panisse Vegetables and Chez Panisse Fruit, The Art of Simple Food and The Art of Simple Food II. The writing and recipes are outstanding but Patricia  Curtan's illustrations add so much to the desirability for me. Curtan's work encompasses simple monochrome line drawings and colourful studies of fruit and vegetables, which often burst through the boundaries of their drawn frame, as full of energy as their subjects.

These days you can buy a Patrica Curtan linocut print from her website. Once a drawing is made, linoleum blocks are hand-carved, a separate block for each colour, then printed one block at a time on a 100 year old 10 x 15 Chandler & Price platen press.  Fine papers are sourced, mostly from Europe and Japan.  There is one more book I covet.  Menus for Chez Panisse: The Art and Letterpress of Patricia Curtan - this link offers the best on-line view of the content.  The book traces the development of the artist over 40 years through 100 menus prepared for such luminaries as Merce Cunningham, Mikhail Baryshnikov and Diana Kennedy.  This is also the book which offers some insights into how Patricia Curtan works.

The softly blushing apple illustration which introduces the chapter on Apples in the Chez Panisse Fruit Book is a particular favourite.  In the English alphabet, A is always for Apple.  Yet the domestic apple tree is not native to the British Isles at all.  There is evidence that Malus (apple) trees grew wild in the UK in the Neolithic period but they would have been of the sour Crab apple variety.  Malus coronaria, native to North America, is an exception being a wild, sweet Crab apple.  Now that we can make them palatable by the addition of copious quantities of sugar, we value the crab apple for preserving, mostly as a jelly.


"God gave the crab apple and left the rest to man."
from Jane Grigson's Fruit Book


The domestic apple, Malus domestica, originated in Eurasia, thought to be in the Kazakhstan region. Cultivated apples can be broken down into the high-acid Cider apple; the tart, low sugar Cooking apple; and the ideally crisp, juicy, usually sweet Eating apple.  Known to have been cultivated in Arabia and Greece, it was the Romans who introduced the domesticated trees to the rest of Europe. Malus domestica reached the Americas with the early settlers.  A climate without extremes of temperature and adequate rainfall suits the Malus perfectly, making it the ideal fruit for the UK climate.  The development of new varieties reached its peak in the 19th and early 20th centuries and now numbers several thousand.  However, as Jane Grigson pointed out in her 'Fruit Book', in the case of many later varieties, flavour and texture has been sacrificed for uniformity of size and yield.  In the UK, Brogdale, which documents the National Fruit Collection, offers an A-Z of Malus domestica from the sweet, aromatic English Adam's Pearmain to the juicy, nutty German cultivar Zabergau Renette.

My favourite eating apple?  It would have to be the firm, sweet and juicy Worcester Pearmain, though the deliciously perfumed Discovery - always the first to market in the UK - is a close second .  There are so many recipes for apples I could have chosen but it's hard to beat a Tarte Tatin so here it is.  Purists look away now - I use rough-puff, not puff pastry and not just because it's easier to make.  It produces a pastry with 'bite' to perfectly balance the filling.  I must have consulted a recipe the fitrst time I made Tarte Tatin but it's so long ago I no longer remember who to credit.  Still, it's a classic and it's lovely and my pastry recipe is courtesy of the Roux brothers.

To make rough-puff pastry, add the salt to the flour and place on a work surface.  Add the butter and rub it into the flour.  When the butter cubes are small and half squashed, form a 'well' and pour in the iced water, gradually mixing with a knife until everything holds together - do not knead or your pastry will be tough.  Roll out on a lightly floured surface to a rectangle about 1cm thick.  Fold in three, bottom to mid-point, then top to bottom, and turn 90 degrees.  Roll out again to a rectangle and fold in three again.  You have now completed '2 turns'.  Wrap in cling film and refrigerate for 30 minutes.  (If you only want enough pastry for one tart, cut in half at this point and freeze the unwanted half for later and, when you want to use it, defrost, roll and give it 2 more turns).
Roll out the pastry to a rectangle again and repeat the folding process to complete two more turns.  Rest in the fridge for a further 30-60 minutes.
Roll out the pastry thinly (cut in two first if you decided to make two rounds) to a rough circle and cut a disc(s) of around 22cm/9".  Place on a lightly floured tray in the fridge for 30 minutes.
Heat the oven to 220C (Fan 200C)/Gas 7
Melt the butter in a 20cm (8") heavy-based, oven-proof pan.  Add the sugar and cook on a medium heat for 5 minutes to caramelise.  Add the apples, round side down, and cook for 5 minutes.  Top with the chilled pastry disc, tucking the edges down inside the pan, and cook for 2 minutes.  Place the pan in the oven and cook for 30 minutes. Remove from the oven and cool for 4-5 minutes.  Place a serving plate on top of the pan and invert to turn out (take care not to burn yourself with hot caramel).

If you leave me a message I will always respond

© Take One Dish 2014-2015
Unauthorized use or duplication of these words and pictures without written permission is strictly prohibited. Links may be used, provided that full and clear credit is given to Take One Dish with appropriate and specific direction to the original content.